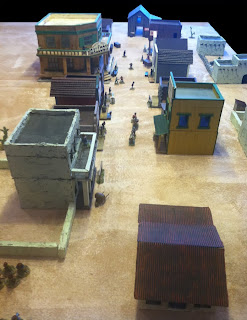 Hadn't played Fistful of Lead in awhile. It was time to dig the not-so-sleepy border town of Lesterville.
We had 7 players and 2 1/2 hours. Perfect for FfoL. The scenario: Johnny One-Leg, notorious leader of the Leftover Gang (so named because at the time I had run out of miniatures in which to create theme gangs) has been captured. He is being held in the Lesterville jail, guarded not only by the Marshal and his men, but by a group of concerned citizens (in reality the Society of Gentlemen Gunfighters).
Johnny's gang has teamed up with Dixon gang (so named because they are made up of Dixon miniatures) to spring Johnny. Not out of any kind of loyalty, but because Johnny's the only one who knows where the loot from the last job is. 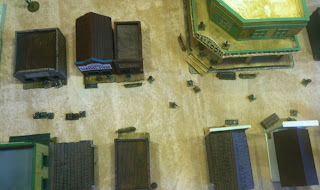 Throw into the mix El Guappo and his banditos and Yellowknife ("Yellowknife cannot be killed by white man's bullets")and his Commanches also wanting Johnny for his gold.
And finally, waiting in the wings the cavalry, ready to ride in and help the outnumbered Marshal, but only when the player controlling them gets a "7" card in his hand. 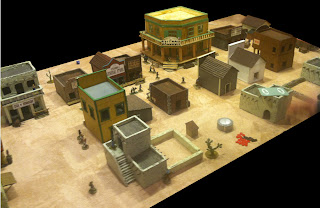 The Marshal's men and the citizens set up first. Meanwhile, the people of Lesterville go about their work. All the citizens can be interacted with, and move after all the players have activated. Some are preprogrammed, Egg Shin is delivering his laundry, the miners are headed to the mining company.
Some move randomly. The drunk stumbles around d10/2" in the direction the die points. 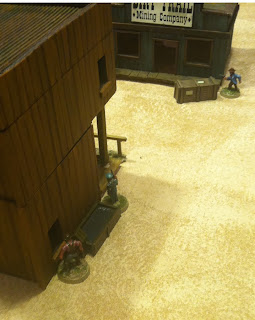 The opening moves went quickly with no action, other than the player (John of Curio Clashes) lucked out and got a 7 right off. The cavalry would be early!
We also have a house rule. The people of Lesterville are a bit trigger happy after all the battles that have raged across their town. Entering a building is done with no hinderance until the first shots are fired. After that, whenever a previously unentered building is explored, any "bad guy" must face a shotgun blast at close range. Another player drops the die. After that , the building is clear to anyone. 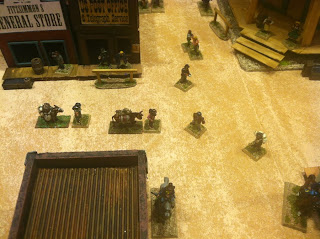 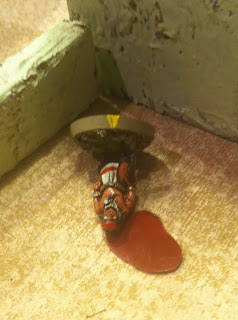 An Indian finds out about the house rule.
Soon, the usual things happened. A Blood Alley appeared. Twenty years of this game and it always happens. Somewhere on the board becomes a regular elephant's graveyard of dead lead. Bad guys turned on each other. Hand to hand was quick and brutal and at least one fight that should have clearly been one sided wasn't. A wounded and down bandito was attacked by a healthy cavalry trooper. The bandito not only killed his assailant, but was up and shooting the next turn.
Always a fun game that seems to write it's own narrative. 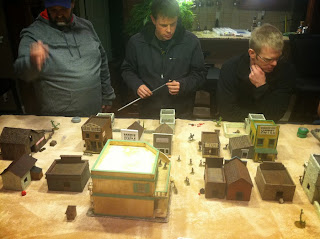 Posted by BaronVonJ at 8:45 AM

I have been playing these rules with you for a long time. One of my favorite rule sets. The action is always fast and furious. However the single most important factor, is how much laughter we have as a group while playing. That was a great night. Thanks Baron!

This game is always a BLAST I ran it for my gaming club just a few months back HUGE HIT and yes we laughed our butts off...