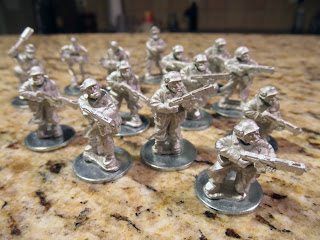 Christmas is about the only time I take any kind of consecutive day vacation. I've been steadily chugging away of my Renaissance armies and to me Christmas break is a great time to do odd one offs and side projects. After playing some 15mm SciFi with the group, combined with 28mm WW2, it got me thinking of 28mm SciFi skirmish. I've always liked Pig Iron's stuff, so this week I bought some.
I have a roughed out a  background that I think will give some fun games. Everything from the big Fleet battles to fights in the burned out cities of the future. I'm looking at a modified Victory Decison for the skirmish rules.
This will be a new Civil War of sorts. The oppressive rule of the United Systems Alliance has finally led to open war. The newly founded Confederation of Free Worlds has made it's first stand on the planet New Meridian. The brave little Browncoats (wink,wink) will have to face better technology and better trained troops to survive, but if they can just hold out, maybe new systems will secede to join them. 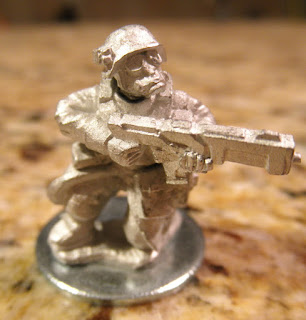 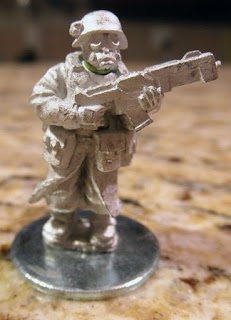 I plan to actually do a WIP for these fellas. Malicious use of Biological and Chemical warfare by the Union has forced the use of gasmasks across the battlefields. Union troops will be played by Pig Iron's System Troopers. 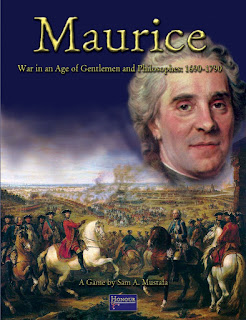 The other project (distraction) is Maurice. I have long been a fan of anything Sam Mustafe does. He's one of the few wargames rules writers that I often stop mid read to go "Yes! That is an awesome idea."
I have the free quick start rules and have read them. They seem to be a combination of two rules I love. The card driven command system of Commands and Colors, and combat mechanics of Might and Reason. A quick Google of reviews of rules will reveal I'm not alone in my excitement. Maurice is meant for the Age of Reason, but I've seen people using it all the way up to War of 1812. You'll just have to wait and see where I go with it. Unkerlant, or another place....
Posted by BaronVonJ at 8:23 AM

Always been a big fan of those Pig Iron troopers, looking forward to seeing what you do with them.

So are you planning all troops to have gasmasks? Cuts down on painting faces. :)

I know those kind of nazi looking plastic figures have gas masks. Are there more to choose from for opposing troops?