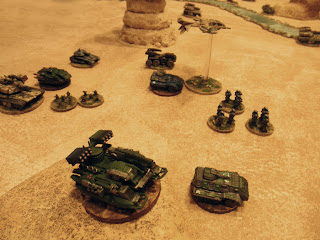 I wanted to try Robofire again with the new suppression rules. Besides, Duke Milo needed to try and stop those dirty rebels. We also borrowed the objective rules from the old, original Space Marine epic rules. Each objective has a point value, higher in the middle. Each turn you hold them, you get points. The crashed spaceship and the oasis were worth 5 points. The buildings, 10 each, while the bridge was 15 points. 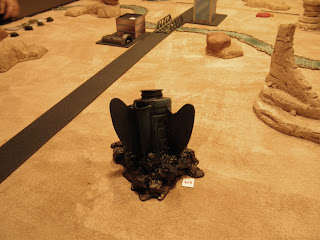 Crashed ship
I made the forces start in opposite corners. The infantry got to ride in style thanks to the purchase of some APCs (6 inch moves on a 6 x 8 table has left Infantry out of some fights).
Also brought command vehicles. They had Electronic Counter Measures that would help troops around them in defense. I came up with a new system: "Advanced Communications" that allowed the CO to give a re-roll to any troops within a short move of him. 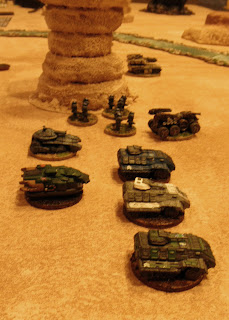 APCs move up under the wing of the Command vehicle
The game itself played great, although with 8 guys alternating single vehicles it slowed down. We need some sort of group move ala Future War Commander. We ended up having to group move the APCs to keep the infantry as a group. 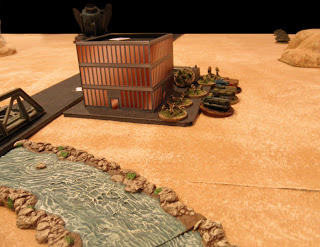 Infantry take the building (a work in progress)
Still to do for 6mm SciFi/Robofire: I need some more urban terrain, which I'll probably build in geomorphic blocks. Also need to flesh out some troops so I have at least 3 of each thing. And tons more infantry...
Posted by BaronVonJ at 7:30 AM