After all the skirmishes lately, I thought we needed some big battle action. Time to bring out the 6mm Nappies, 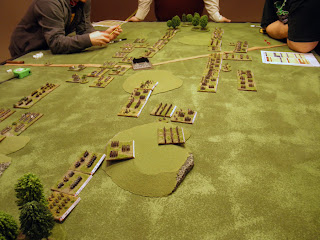 The Austrians have gotten pretty hammered (not in a good way) the last dozen times they've played, so with some more troops fielded, we thought they'd have a fighting chance. That said, as the Austrian commander, I watched my left crumble almost from the get-go. But luckily, the right held and the wargame dosey-do began. 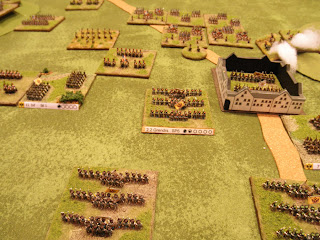 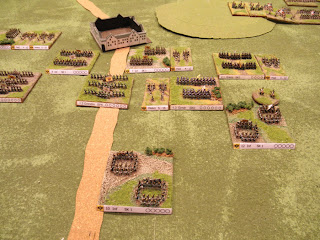 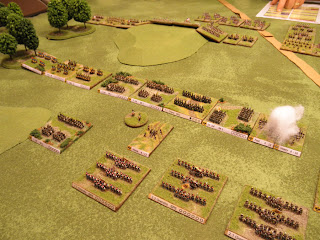 The town in the center changed hands a couple of times, finally held by the Austrians. As night fell we still had it, giving us a somewhat Phyrric victory. 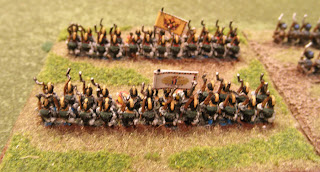 Oh well, the figs looked nice.
Update: I was asked how to do the town. Print this 4 times, mount to foamcore and glue together. If you're really good, notch out the corners of two so you don't see the foam.

Posted by BaronVonJ at 7:50 AM

What a panorama! Thanks for sharing these pictures. Mind if I ask where you got those cool square built-up-area / buildings? I've been looking for something like that for my own Napoleonics project.

And did you paint them by hand, or create the artwork on a computer and print it out? Thanks!

Computer and print. You could even do the insides if you wanted.

Nice. I don't suppose you still have those files, and that you'd be willing to post them?

Very nice! I recently dipped my toe into the 6mm scale with some Roman Republic figs by Heroics & Ros. My local FLGS carries them. The sculpting is kind of so-so though.

I don't think I have the files anymore. If I get around to it, I'll see if I can whip out a new one.

Excellent! Thank you very much!