The Battle of Port St. Hubert by GASLIGHT 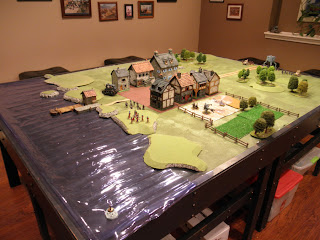 In a startling move, German troops have landed behind French lines, and captured the seaside village of Port St. Hubert. The village could become of great strategic importance, as the harbor is deep enough to accommodate transports. 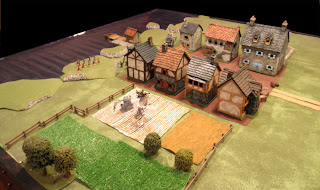 French troops on leave a few miles to the north were quickly dispatched to Port St Hubert. Awaiting them were a few German regulars with a few light armored conveyances, and the Empress's Own Elite Lady Hussars.
The German's reacted quickly, sending their KIllenkanner, a horrible killing machine that spits fire, and steam velocipede hurling forward. These jabs, however, were countered. A French Turtle destroyed the Killenkanner with its first round, while accurate fire from the Zouaves killed the velocipede's driver and gunner. 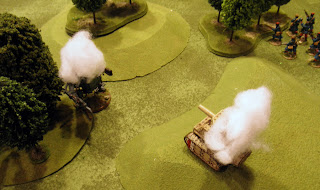 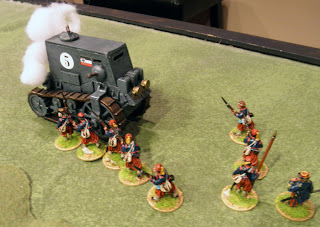 Watch out for those fellows in fezs!
Next, the Hun threw their armored clockwork conveyance at the Zouaves. The sturdy fellows charged the beast. A well placed week old baguette mucked up the treads, immobilizing it.
Then, a buzzing was heard overhead. Those dastardly Germans had a flying machine! It strafed a group of French Regulars and dropped a bomb on the. Instead of scattering, they brought down the flying menace with a volley of rifle fire. 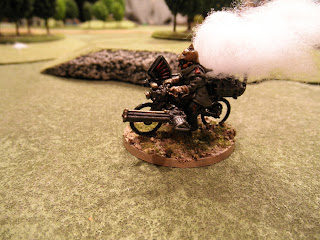 the Jaguar streaks across the battlefield 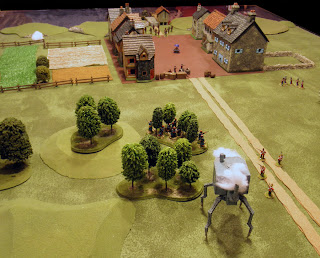 After the arrival of some British reinforcements, it looked as though the Frenchies would roll over the German defenders. But no one during the battle had notice the approach of a submersible. It silently docked and began unloading troops. Klankers! Surely the work of the Nefarious Proffessor Nightshade. The automatons left the peir and began a steady march down the main street of the village. 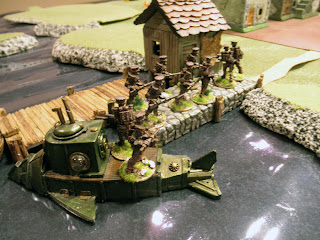 As the French cleared the trees, they were shot to pieces from the buildings on the edge of town. As if that wasn't enough, a dark shadow passed overhead. Rokkitruppen leapt from their transport zeppelin and landed right next to the French Spyder steam contraption. They managed to kill the Spyder's commander before it lunged forward, shaking off the sky pirates.
At the same time the Lady Hussars had assaulted another Turtle. In a panic, the Turtle's driven threw the beast into reverse. It slammed into a rock outcropping, tipping it over on its back. Sweet irony! 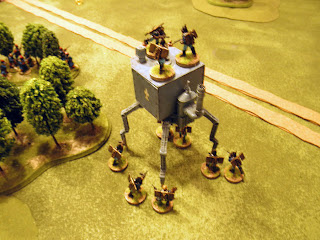 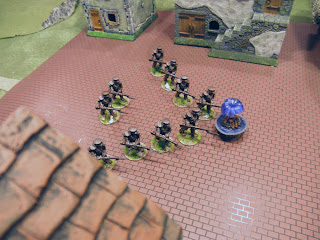 All was lost for the French. That didn't stop their heroic leader, Colonel Fraumage from single handedly attacking a unit of Germans hold up in the houses. He not only routed the poltoons, but also dispatched that member of the League of Calamitous Intent, the Duchess D'Harme.
With a deep water harbor in their hands, the German transports started landing....
Posted by BaronVonJ at 10:20 AM