Some Bugbears and a Battle 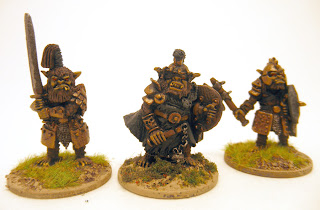 Finally. I painted up some the stunning 15mm figs from Splintered Light I bought at the Spring RECRUITS earlier this year. This is a Bugbear Chieftain and his bodyguard. Since they were mostly brown (according to the ancient Monster Manual I own), I decided to make their gear mostly black. I wanted more of a tarnished look, so for these guys, I did more of a bronze armor. The rest, of which I bought a ton, will have more traditional steel/iron armor.
I'll have more painting to post tomorrow. Hopefully. 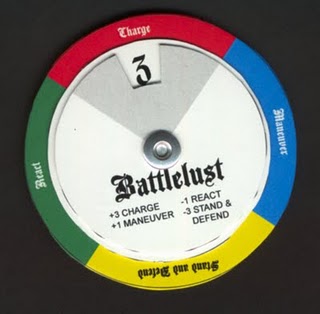 Last Thursday we ran Flower of Chivalry game. A blast as usual. I premiered the Battlelust wheel for keeping track of orders and each commands status. Went over well.
The battle itself had the usual push and pull, then one giant collapse we all have come to love.
Some highlights:

The king's battleline (I gotta figure out this camera) 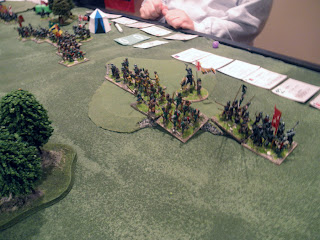 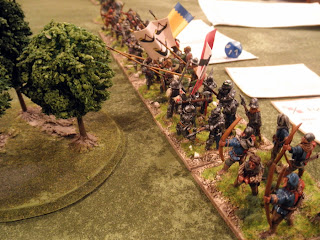 There's cover in these woods men! 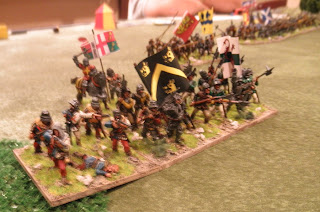 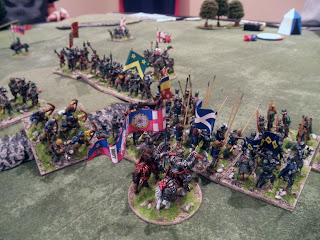 The king wades into the fray.
This Thursday is a Fast Play Grand Armee game.
Posted by BaronVonJ at 7:29 AM

Nice work on those 15mm Bugbears, Baron! Makes me want to do some 15mm skirmish!

Probably use them in some Song of Blades, or an arena game I'm working on (can you say Goalsystem?).
Or, even thinking of a ITEN for fantasy.
-J

Can't be that hard to figure out.