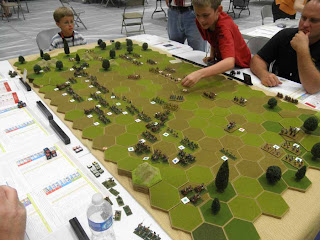 And many more. I'll be running something next Spring (there are 2 RECRUITS-cons a year). I picked up some figs I'll post here shortly.
Posted by BaronVonJ at 8:40 AM

Some stunning looking games, I love the look of the FIW game and the ship looks simply fantastic!

Looks like a great time! If my company ever gives me time off, if WTNW ever makes it big or if I get off my butt and save one year maybe I can make Recruits. If Shawn needs more help writing rules maybe I can do that as well. Anyway love the ships and the games look like a lot of fun. I will be going to a con in a few weeks though it is a local HMGS con. Great report!