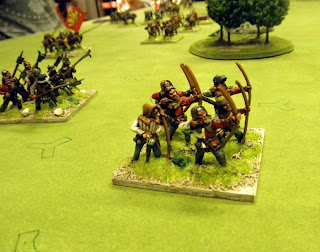 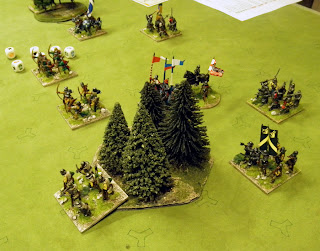 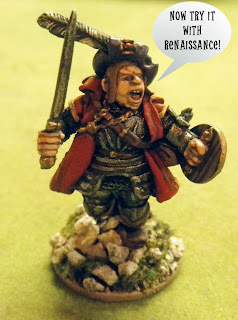 How big is the table you played the game on? It seems to be very big.

Did you make the hex markings on the tabletop mat or are such mats available somewhere?

Just curious...
Thanks in advance for answers and for sharing the photos :)

--
Mahon
Chest of Colors: All About Miniature Painting

My tabel's 6' x 8"
It has a top I made from this great heavy paper that has not really flock, but a fuzzy texture embedded in it. I got it at a model railroad place, and I can't seem to find it anymore. It has survived spills, stains and 10 years of abuse. I have since I created a another top for it using the reverse side of a vinyl tablecloth painted green. So, I decided to take the old top and make it useful.
I made a stencil for my 6" hexes. I had about 8 hexes on the stencil. I then proceeded to draw in the corners with a felt tip. The result was very subtle.

Thanks a lot for your answers. The table doesn't look like paper at all. Great job.

--
Mahon
Chest of Colors: All About Miniature Painting