Fistful of Lead: A Pit Full of Snakes...

...or a Fistful of Joes, or "Never Buy Ammo from Destro"...
I've been painting up 28mm Joes as a surprise game for Jon of Curio Clashes for awhile. I remember the cartoon fondly from my childhood, being in that weird age between the big 12" toys and the smaller 3.5" action figures. But Jon is a big fan of the comics. I stuck to supers only.
The scenario was as follows: Natives from a remote South American rainforest have been driven off their hunting grounds by mysterious strangers. These strangers have been digging holes deep into the jungle floor near the sacred statue of the Snake god. The special unit of the US military has been dispatched to investigate... 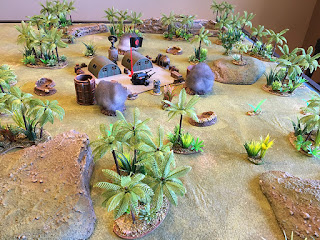 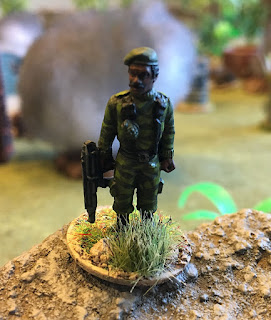 The Mission is led by Stalker 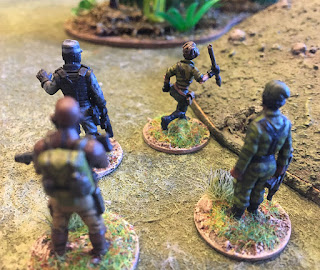 Move in team!
There were 6 players, 3 Joes, 3 Cobra. I got to play the vivacious Baroness. By the end of the game I had perfected her Eastern European accent... 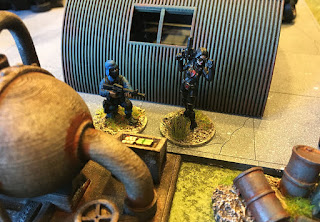 The Joes had air support, but they couldn't use it until they knocked out the Cobra antiaircraft gun (I think forgot about this part). Cobra had back up in the form of a HISS Tank. 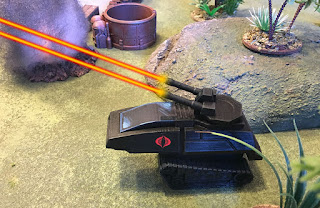 Pew, pew, pew!
Opening shots were unleashed by two trigger happy Cobra soldiers at Freedom, the pet and stalwart companion of Spirit the GI Joe tracker. A lot of lead had resulted in little result. 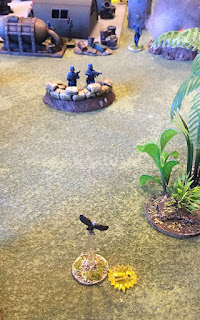 In fact, Trooper 7801and Trooper 2325 spent most of the game trying to kill that buzzard, um, eagle. They took grenades and machine gun fire constantly, but it was that dumb eagle that would ultimately kill them both. Trooper 7801 was wounded three times. Three times a Queen of Hearts brought him back to hold the line. 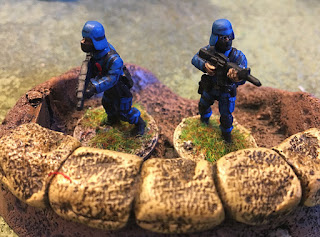 The Baroness and Destro managed to take out most of the northern attacking force, with the Baroness dropping Snake Eyes before he even got in the fight. It is here we pause for a moment.
Destro is the arms dealer for Cobra. He owns factories that make weapons and ammo. Throughout the game, the number of 1s rolled was insane. We began to blame chrome dome for shoddy ammunition. In fact, there was almost a friendly fire incident. Destroy even started to roll 1s. 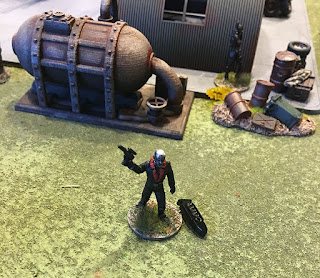 Also, despite having better quality troops, and the Team Trait "Loyal" which prevents your team members from routing, some members of the Joe team spent their time (as usual) hiding in the trees. Years of taunts over this behavior has not altered the player-we-will-not-name's choice of game play. Knowing his game tactics, Cobra was able to ignore him and concentrate fire (that was working) against the northern flank and wipe them out. Poor Jon, the game was for him and he was out in 4 turns. 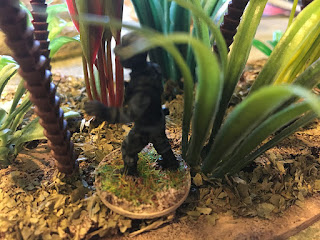 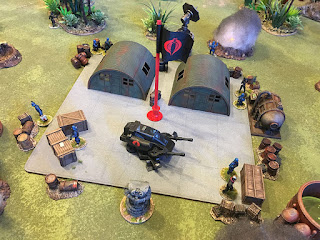 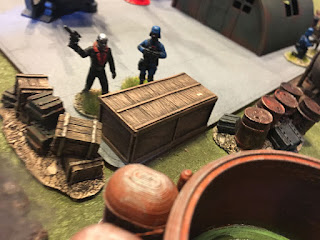 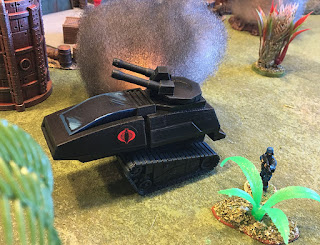 After two hours it was clear Cobra forces would escape with the Serpent's Eye, a huge ruby that could be used to fund their nefarious plots or say, focus a death ray.... 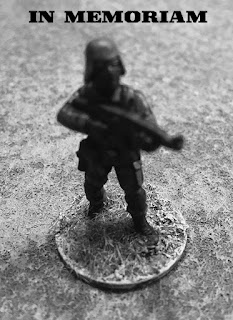 Trooper 7801 was awarded the Serpent's Cross posthumously for holding the line, and finally "killing that bird".

Posted by BaronVonJ at 9:59 AM

It had taken Spirit years of selective breeding to create a Buzzard-Eagle. That bird was kick-a$$. Great game last night Baron, really enjoyable.

The Serpent's Cross! BWAHAHA! That is brilliant. Amazing how atmospheric it gets by adding the banners and so on. Instant Cobra. Kudos to you guys.

I really like this. I have bought a lot of the G.I. Joe figurs and really want to play it as well.

I am guessing it matters little which exact "Fistful of.." set is used. I got the Galactic Heroes one - it is suitable, yes?