Campaign for the Kingdom: The Center Can't Hold 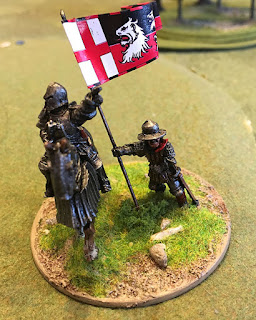 Last night we played one of our group's favorite games, our Campaign for the Kingdom. WE've been playing the rules for about 20 years, with lead just as old. This is a mapless campaign. The player with the most points, accrued by victories, is the Claimant. The player with the next highest, is the Pretender. First player to agreed upon total wins. In this case 12 points.
In the this battle, the Earl Rutiger was defending his claim to the throne from Ulric, Duke of the Black Isles. I played Rutiger, in absence of the real player. 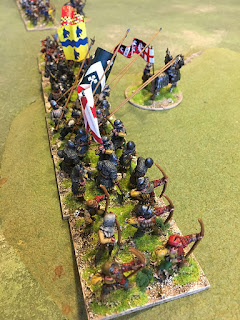 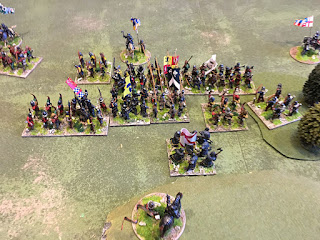 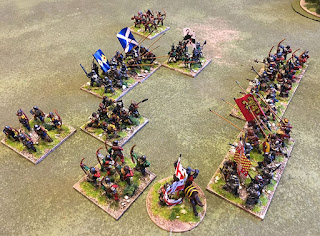 The first few turns saw a cautious advance on both sides, players trying to hold their lines together. But, of course, there were a few commanders who got jumpy and the lines surged forward.
This game is a delicate dance of controlling your force's Battlelust. For the most part they will follow your orders, but different factors and terrible dice may send them charging forward, or cooling their heels. Too much aggression, they get tired. Too little they start thinking about those crops at home that need harvesting.
Then theirs the almighty Order Deck. The deck consists of Aces (or 1s), twos and threes cards, and a reshuffle card. The better the commander, the more 3s in the deck. The poorer the commander, the more 1s. After commanders have given orders to their troops and rolled to see if they obey them, then the Order card is revealed. This is how many actions your troops can make. The right card at the right time can be a game winner.
When our troops met, it started as a slap fight. No real casualties inflicted for a turn. Then, all hell broke loose.
For two straight turns in the middle, Rutiger and Ulric's troops slaughtered each other. No retreats, just a brutal bloodbath. Of my 6 units on the table, only one remained. That meant a loss of 4 more units would break us. 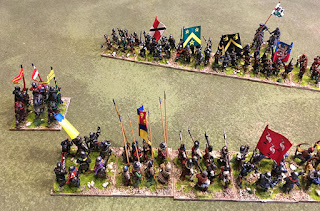 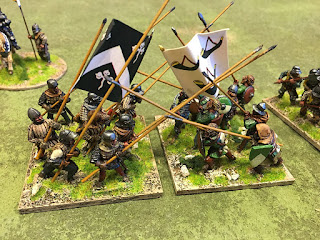 The flanks held. They managed to give as good as they got, and by the final turn it came down to each side only needing to inflict one more casualty.
A barrage of arrows ended it for us. Ulric claimed victory. Rutiger was beheaded (lost 2 points) and the victorious side received each gained a point along with a bonus point that can awarded to anyone, regardless of side. Ulric claimed it for himself. There was some grumbling among his troops for this move. 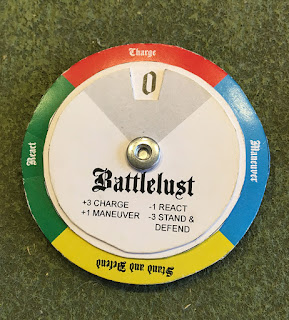 The dreaded Battlelust wheel
I'm really thinking of finally publishing these rules. They grew out of an older set of rules that we've long since added to and made or own. This would be a departure from the "Fistful" family, but a much needed diversion, and great set of rules for the right group. 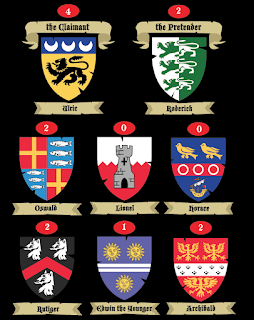 Posted by BaronVonJ at 9:04 AM

"A 20 year old rule set with miniatures just as old" love it!!

I kept trying to figure out what rules you were using when you posted up pics and AARs before. They sound like funtimes and a low 'overhead' campaign.

I love these armies, small and beautiful.
It's a pity don't have more photos of them.

Just hit the Campaign button under "Labels". You'll get years worth.

These sound very much like Flower of Chivalry. I’d love to see what additions you’ve made or adjustments you felt needed. A post on the blog would be great or via PM.