The Beast in the Woods, a Fistful of Lead Tale of Horror

Thanks to the diligence of ace reporter Buzz Brewster of the Daily World News, we able to report on the strange goings on outside the mansion of Billionaire Karl Kensington.
Late on the night of January 17th strange lights were seen in the woods of Kensington Manor. The same mansion where only weeks ago the three heiresses to the Kensington Kandy fortune died in a mysterious fire that all but destroyed the mansion, and devastated the Mr Kensington himself. 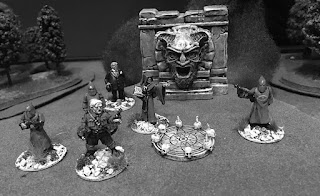 Our reporter, Buzz Brewster, was able to glean from local sources that Mr Kensington, in his grief fell under the spell of some local charlatans who promised him contact with his dear departed daughters. It appears they tried to perform some sort of ritual in the woods. 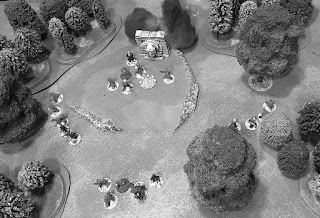 It turns out, these hooded creeps are actually the criminal organization known as "Cyclops", led by international criminal Dr. Stefano Cyclops. Who knows what their final plan could be? 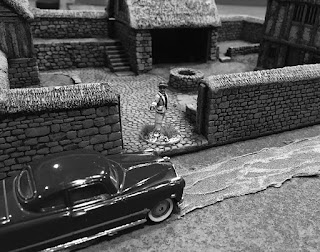 Buzz Brewster arrives on the scene... 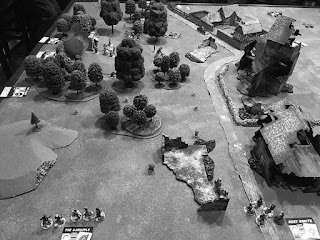 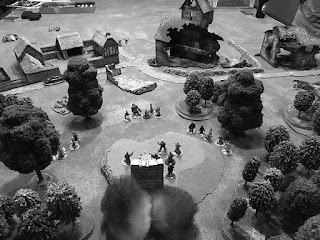 Lucky for Kensington, and possibly the rest of the world, heroes arrived to save the day: Dutch Oven and his Howling Aces. 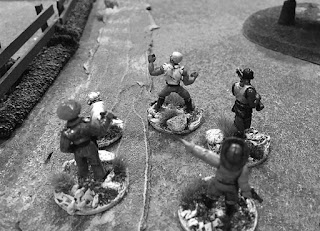 Roxy Rokkit and her crew. And (not pictured as the camera mysteriously failed to work) the enigmatic Gargoyle. 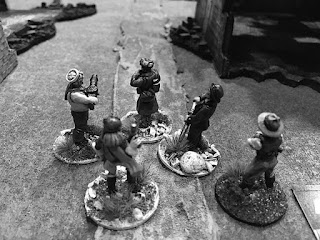 As soon as our heroes arrived they were immediately met by gunfire. Dutch, the Man of Cast Iron, went down to two gunshot wounds. Never fear, citizens, he was quickly on his feet! (thanks to a few Queen of Hearts played successively over a couple of turns). 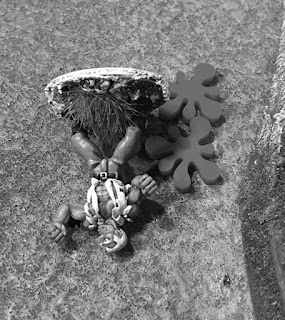 Brutus, Dutch's faithful bulldog, took revenge by attacking Dr Cyclops himself! The old war dog was able to down several of the red hooded villains. 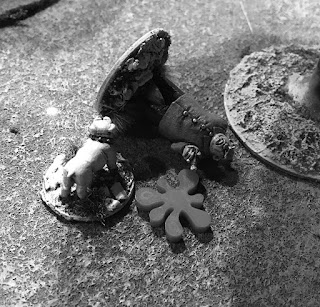 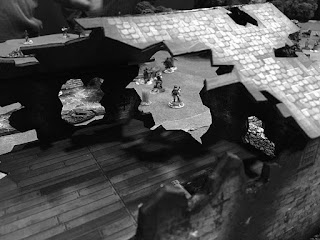 The battle in the woods seem to attract strange lights and mournful howling. Could the spirits of the deceased daughters truly be contacted? 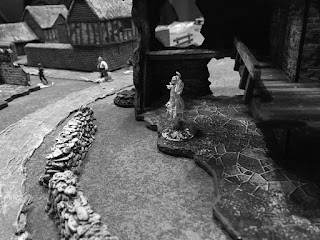 A fourth group of heroes arrived in the form of Handsome Max Haggerty. with the help of his loyal henchmen, and woman, they were able to gun down the vile Cult leader performing the the ritual. Unfortunately, the interrupted spell led to disaster. With a lightning flash and rumble from the very earth, a giant horror appeared from nowhere.
The beast preceded to vomit forth vile toxins and instill fear on all who met its gaze. Handsome Max's henchman, Angus McTubby, who had already dispatched several cultists, seemed immune to the creature, and along with ol Pappy poured round after round into the creature, finally dispatching it to the netherworld from whence it came. 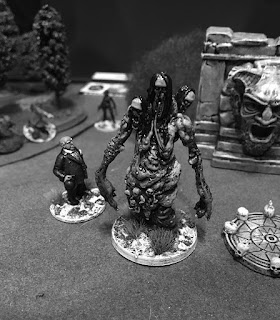 This was a play test for the upcoming Fistful of Lead supplement Tales of Horror. It worked great. The miniatures were all provided by Basement General Steve and really fit the pulpy mood of the story. The baddies really got a thumping, but it was still fun. We had 8 players and the whole game lasted 2 hours exactly.
Stay tuned for more. 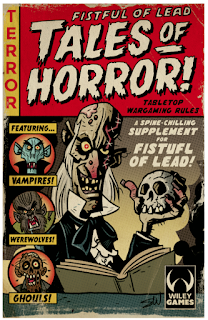 Posted by BaronVonJ at 8:42 AM

Super Noir- and bonus points from anything that is inspired by those old comics!
Cheers!