Battle at the Crossroads II- Fistful of Lead 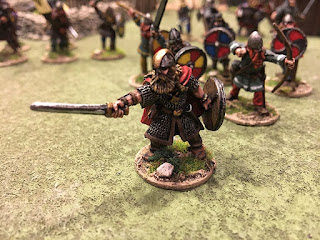 After last week's play test, last night was a repeat scenario but a different take on armor: Armor as a Ye Olde Save roll. 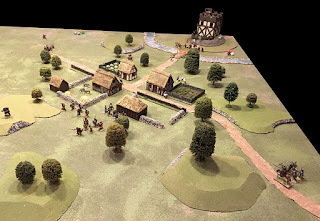 All other rules remain the same, with the same modifiers. Each player had a Leader rated as d12, wearing chain shirt, helmet and shield. This gave them a save roll of 7+. The rest of each retinue was a mix or armored and unarmored troops. Vikings had bows. Normans had crossbows. Bows could fire every turn, but crossbows took full two actions to reload, but got an armor penetration bonus. 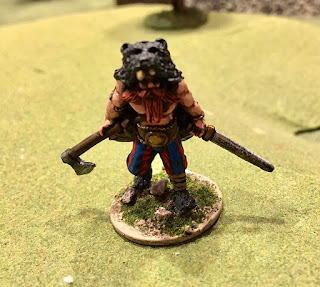 Wolf the Berserker- They had the Bloodthirsty & Flurry of Blows traits, but no armor. 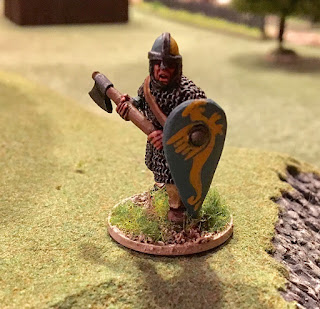 Guy de Foiegras, defender of the realm, or at least his bit. 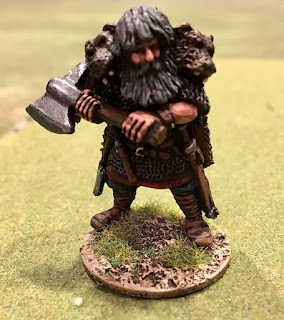 Born Twobears, a giant of a man
The Norman leaders got horses and a nice mounted charge bonus, but the Vikings got an extra miniature to make up for the disparity.
Any hits, whether from shooting or close combat were rolled to Wound as usual. An armored target (even if just a shield) got a save roll. If the save was made, the wound level was reduced one step.
Out of Action becomes wound, wound becomes shock, shock becomes nothing. If a player rolled a natural 10 or higher on the Wound roll, there was no save, they found a weak spot.
Jokers played became reinforcements for whoever played it. 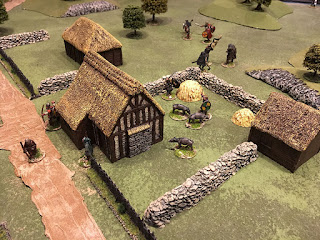 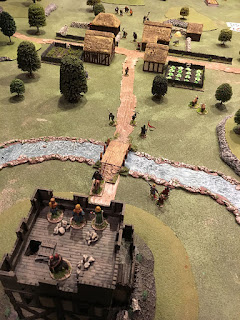 a view from the Fort 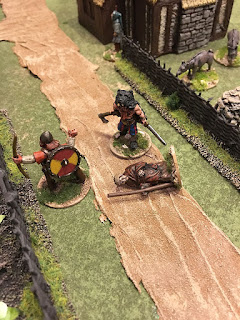 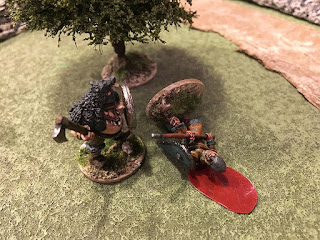 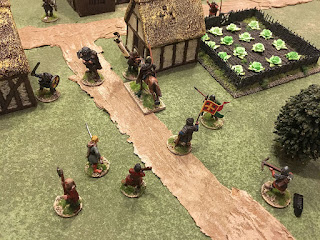 The battle at the crossroads begins... 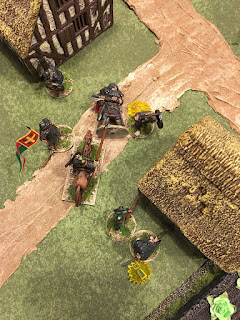 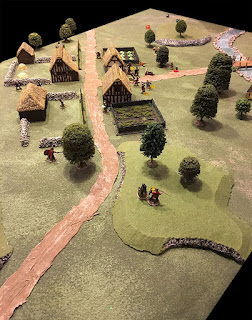 How'd it play?
The Vikings made a mad rush towards the village in search of loot. A pig was grabbed and a lagging Viking reinforcement entered the field. The norman force coming up the road tried a flanking move, but was soon cut off. The Norman leader was unhorsed and forced to fight on foot (a wound or Out of Action result unhorses the rider and leaves them dismounted Shaken). The Normans from the fort charged out to break up the looting.
A crossbow brought down one Viking, and the Norman Lord rode right into the Viking standard. At the last minute, the standard bearer swooshed the raven banner at the horse, startling it and ruining the charge (i.e. the Norman rolled garbage and the standard didn't).
A huge scrum started in the middle of town. A lone reinforcement charged out of the fort but was dropped by a bowman before he help.
By the end, only the now dismounted Norman Lord remained. He had 4 shock markers on him. He managed to drive off most his opponents and clear his head, only to have a lucky arrow, Harold Godwinson style, drop him.
Victory to the Norsemen! 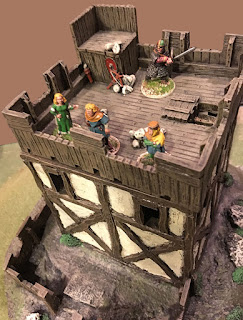 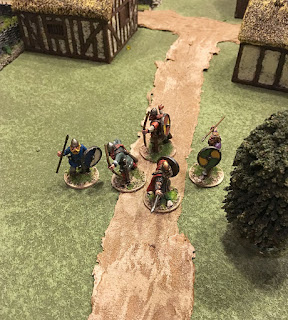 To the survivors the spoils! Where'd the pig run off to?
Group consensus was this second way, was much smoother and required less mental math. It played like a movie. Lots of decisions to be made, changes in strategy based on the card deal, and cinematic moments. Another test in in order, but I think it's the way to go.
Back to working on the core book!
Posted by BaronVonJ at 8:38 AM

Wow! Nice battle report! I have tons of dark Ages early medieval stuff so these playtests are very cool!

Great, I will use my Teutonic warrior against the baltic pagans!

That looks a lot of fun. Love the characters!

Anything with a motte and bailey rocks!