Fistful of Lead meets the Age of Steam 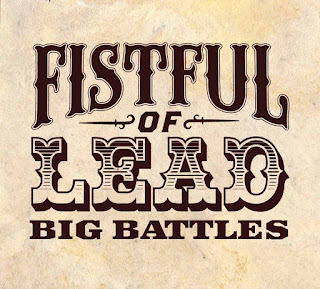 Last night the Basement Generals gathered in, you guessed it, the basement to try out some rules I've been piddling around with on and off for years. It combines ideas from all over, but mostly from my own Fistful of Lead family. These are meant to fight larger battles with units of 10-12 miniatures and vehicles but still have the ease and fun of a FfoL game.
The Battle of the St. Thoreau Swamp:
We had 6 players each controlling 4 units, including large and small steam powered contraptions. Most will recognize them from earlier GASLIGHT battles. Players got one card for each unit they control, just like in FfoL where you get one for each miniature. The special abilities of each card work the same or similar, so a unit with shock (which halves your shooting dice) could pass a Recovery check automatically with a Queen of Spades, etc.
Each leader also got a special (mostly awful) ability. 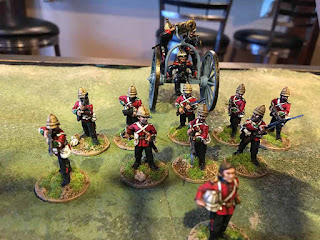 The battlefield. Swamps prohibited movement in the middle. 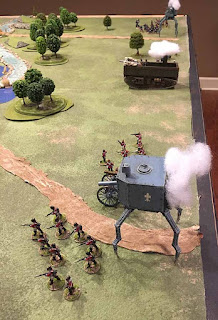 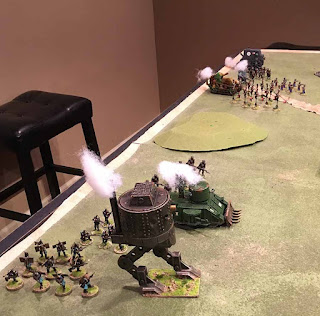 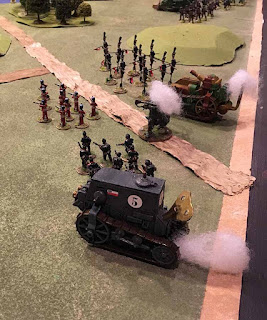 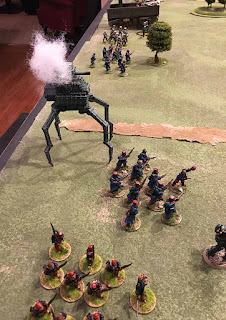 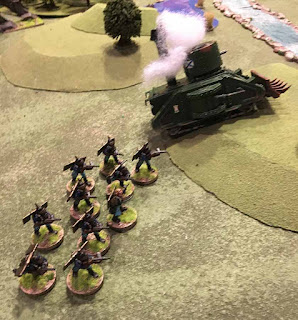 Rokkitruppen advance. They had the ability to jump, using their rocket powered packs 20", but each mini had to roll a die. On a "1" they were lost, flying off like a bottle rocket to explode. 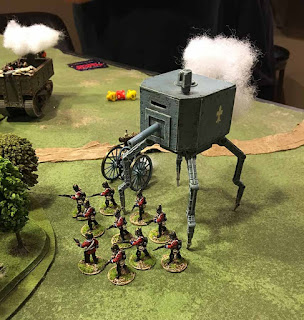 L'Spyder moments before it brewed up and collapsed like a dead spider. 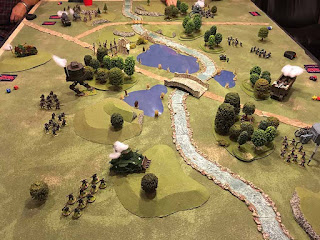 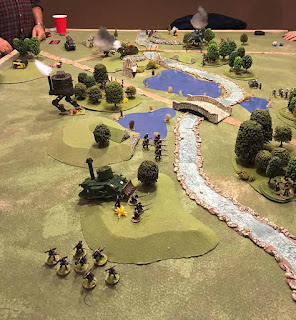 The Germans won the day by taking out all the Allied contraptions. The rules went really well. They work for straight up colonial battles too. Some great moments:
The Zouaves, led by a near sighted leader, could only shoot close range. They kept hoping a lucky bullet would drop him.
The crew of a perfectly good steam tank bailed after rolling a "1" on Recovery.
The list goes on. We had 24 units on the table and fought to conclusion in 2 hours. I'm really liking where these are headed.

Posted by BaronVonJ at 8:47 AM

Seems to run smoothly. 2 hours sound good for a battle sized like that.

This looks brilliant. I’ve plenty of VSF stuff sitting around waiting for a game system like this....

Great looking game! I too have toyed around with a game for units of 10-12 figures, mine owes a nod to Star grunt, but I have also borrowed/adapted rules from a number of sources. I look forward to seeing the results of your efforts, certainly in line with my thoughts.