Fistful of Lead: A Sci-Fi slugfest 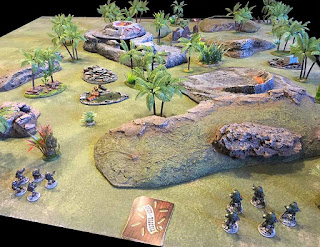 I have a bunch of Sci-Fi miniatures. I have a great set of Wild West rules. Let's combine the two shall we?
United System Alliance forces just blew up a ConFed base with an orbital strike (how timely). Now rebel ConFed troops have to retrieve what data they can from the ruined base while Alliance troops do the same. Uploaded intel was worth 5 Victory points, while killing an enemy was worth 2 and running them off 1. We played to 30 VPs. 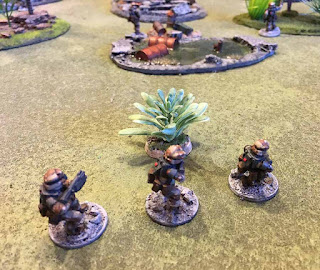 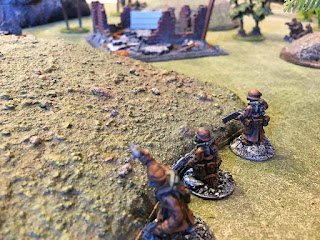 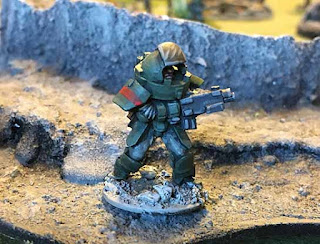 The ConFed troops had 3 groups of 6 men. Five in each squad had pulse rifles (treated just like rifles in FfoL) with one Leader armed with a submachine gun (range 6/12") able to fire bursts. Subs give you the option of burst fire using a 3' template. Anyone under the template can be hit, but at a -1. In addition, they got a sniper who had a range of 18/36" and got a +1 to hit (where's that one-eyed-Jack?).
Alliance forces had 2 squads similarly armed and one squad of armored Marines. The armor gives the Marines basically walking light cover at a -1 to be hit. It's not actually harder to hit them, just harder to be effective. They also get a -1 to be wounded.
The first few turns were spent getting into position. The sniper was the first to open up, be his shots proved ineffective against the Marines. The Marines, on the other hand, started to clean up their flank fairly quickly while squads 1 and 2 downloaded the intel. Once a model touched an intel spot they spent 2 Actions to upload it.
Rebels forces collected their own intel and spent some time viewing slag of their former base. 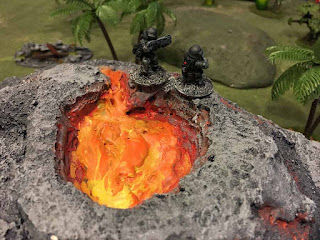 A nasty fight erupted at the entrance of the rubble of the main base. Some close combat ensued with the usual deadly results, but the Alliance was able to secure a surviving intel bot. 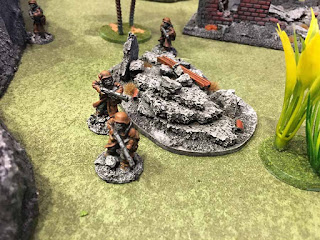 The Victory Point score was an even 29 when the last Rebel of the turn failed his recovery check and routed. Victory to the Alliance 30-29.
The rules worked great. My next test is introducing squad weapons. More than likely I will treat them as essentially one model with one card as long as they are together. We'll see how it plays out.
Posted by BaronVonJ at 8:15 AM

I've often wanted to see how well sci-fi worked with this awesomely simple ruleset. Thanks for posting...

Next on the docket!

Sounds and looks like fun!
I'm starting to build up a variety of sci-fi minis myself. Not interested in painting up 40K armies. I am doing various aliens, humans, robots, etc. - basically anything that catches my eye. And on the lookout for simple skirmish or squad level rules to play games (solo for me).

Great fun and what a close erm, encounter! HOw often did the SMG's come into play, and how effective were they?

Because of the short range. not very often. Only twice this game and only pinned troops.

Seems wrong that I have to prove I'm not a robot on this post.