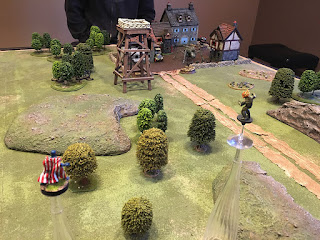 Our heroes, the Liberty Legion have been tasked with attacking and destroying four key items at a secret Nazi base. The base is guarded by many dreaded inventions of the Thule Society and its techno-occult followers.
The Liberty Legion is led by Major Victory. To complete the mission he's brought the Sentinel of Justice (hurray!), Liberty Belle, the cantankerous Klank, and the British heroes Britannia, Druid and Jack-o-Lantern, backed by Lt. Casey and his Raucous Regulars. 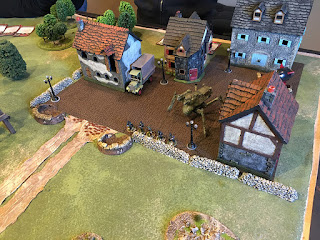 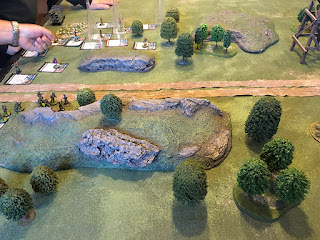 Defending the base were the mysterious Dr. M, Agent Axis and Krieghunde, with a horde of zombies, an experimental tank and loyal Thule Stormtroopers.
The Jack-O-Lantern flew in aggressively, quickly blowing up the radar array (objective 1). Major Victory unleahed his Star Spangled Vision on the tank, damaging but not destroying it.
The Axis fought back, with Klank going down under a hail of fire from the stormtroopers and Agent Axis hidden in the buildings.
The Druid made a play for the objectives but was shot to pieces again by the deadly Agent Axis. He managed to teleport into her building, but she out fought him. Now two heroes were down. 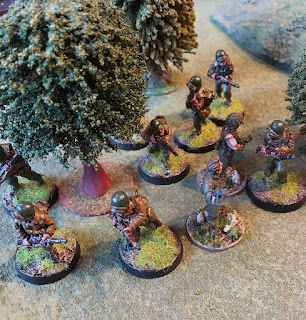 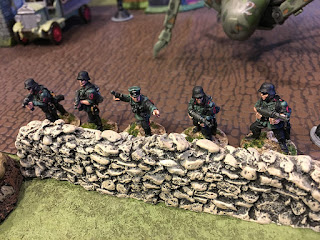 Major Victory destroyed the Super Buzzbomb (objective 2) before mental attack from Dr. M grounded him. Meanwhile the stormtroopers were decimated by the Regulars, Liberty Belle and Jack.
Agent Axis and the sole survivor of the stormtroopers dispatched Belle.
On the other flank, the Sentinel fought with the zombie hordes. He destroyed the altar (objective 3) but Krieghunde appeared swinging a truck as a club. Britannia fought valiantly, but she too went down to a mental attack by Dr. M. Another of the Legion down, but only a heavily damaged tank remained for the Legion to secure victory.
Agent Axis destroyed the last remnants of the Regulars right after they finished the last stormtrooper. 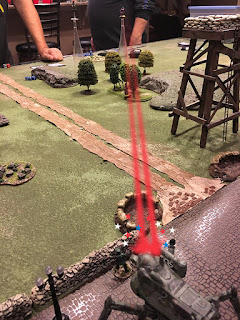 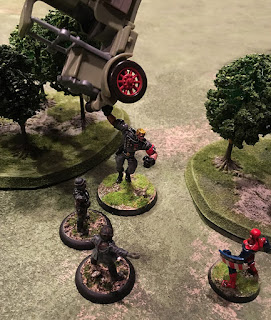 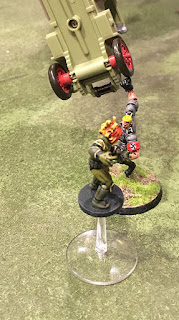 Only Jack and Major Victory were left finish the job, but both had little vitality left versus and untouched Agent Axis, Dr. M and Krieghunde. Time to fall back...
It was deemed a minor victory for the Allies. Three of four objectives destroyed, but at great cost.
A real nail biter to the end. 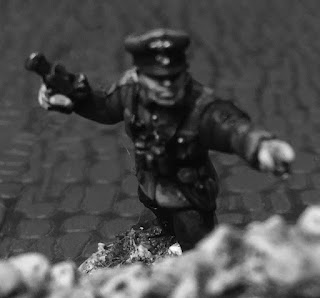 Hauptmann Mauer, awarded the Knight's Cross posthumously.
Posted by BaronVonJ at 10:15 AM

Curse those Nazis! At least the Legion handed them a major setback, but at what cost? Nice to see a return to superhero gaming on your blog. I have to credit you with inspiring me with some of my own heroes, although I may have pinched Jack O' Lantern wholesale - but it is one of the better Heroclix sculpts.

Very cool. Makes me want to play some superheroes again. Made my weekly roundup:
http://beast44a.blogspot.com/2016/05/battles-of-week-1-may-2016.html

What rules are you using?