Campaign for the Kingdom: Battle of St. Bertold's 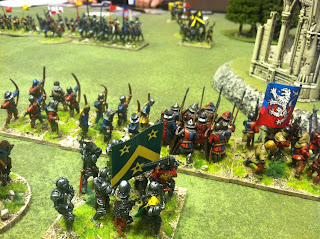 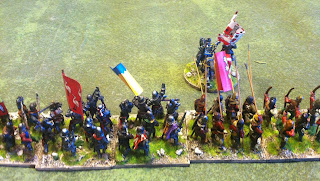 The sun was relentless. Sweat ran in rivers from under harness and helm. Lionel, Baron of Stonekeep, stared across the sweltering fields, past the ruins of old Saint Berthold's cathedral. He has the best claim to the Kingdom now. A few more victories, and the people would see him as their rightful king. But first, there was the matter of Horace, Duke of Dunharrow, and his massive army across the battlefield in front of him.
Lionel was interrupted in his thoughts by the thudding hoof beats of young Roderick, commander of his right flank.
"Nary a breeze to break this awful heat!", he smiled. "Maybe if we just sit here, they'll cook in their plate."
Ah, if it were only so easy, Lionel thought. Then he spoke. "best to get on with it then..."
We had an odd number of players for last night's game. Three players led by Horace would each command 8 units, to my four players commanding 6. It made it slightly easier for Horace to coordinate with fewer commanders. And I was graced with two commanders rated as "Buffoons." 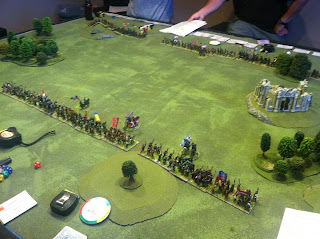 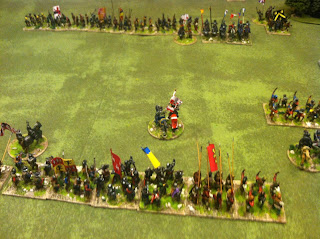 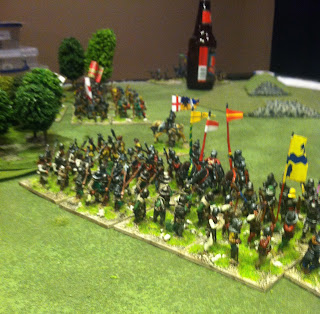 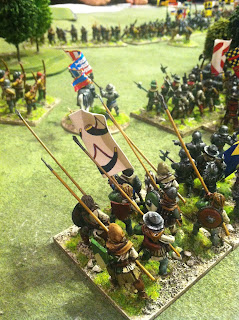 My forces went first, and despite orders otherwise, everyone charged. In fact, Roderick spent most of the game trying to rest his over enthusiastic troops. His archers did, however, manage to run off most of his opposite's mounted knights.
It was a great game for me (Lionel). We pummeled Horace. Our Flower of Chivalry games are usually much tighter games. But the dice gods were with us. Lionel steps one step closer to the throne. 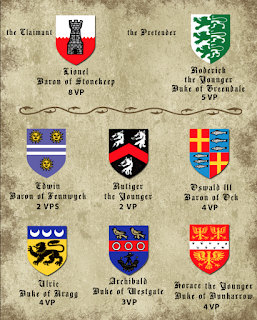