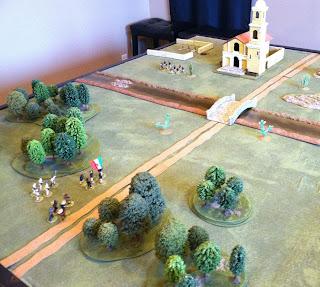 Trying to be a good author, I thought it might be a good idea to make sure the scenarios I'm putting into Fistful of Leads first supplement for the Horse and Musket period actually works.
This was a tryout of ye olde take the bridge scenario.
It's written for any period but as I have an abundance of Maximillian in Mexico miniatures, that's where this one took place. 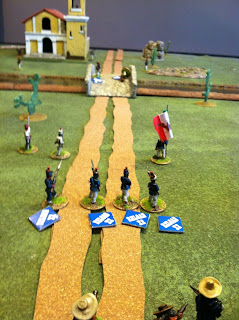 The Republican forces are trying to find a bridge crossing to outflank Imperial troops. They stumble upon a lightly defended bridge. They must secure the road beyond before nightfall.
The Bridge and its road is defended by the French Foreign Legion. They are obviously outnumbered and need to drive off the enemy before more arrive. 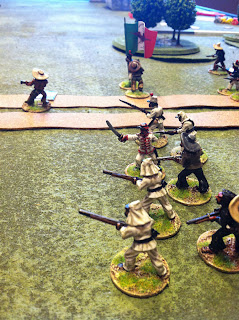 To keep the game moving and give both sides a sense of urgency added a Special Rule. Those familiar with Fistful of Lead will understand the mechanic how cards are dealt to players for Activations. Normally, the Joker is left out. This time one is put back in. It functions as the lowest suit Ace in all respects, except that when it is played by a side, they need to keep track of how many times it comes up for their side.

Things at the bridge get ugly
If the Mexicans play the Joker 6 times, night has fallen. If they haven't secured the bridge. They lose.
If the Legion plays it 6 times, Mexican reinforcements show, and the position becomes un defendable.
I played the Legion. We never got a Joker, or a break. My fault. I spread to thin. The Republican troops came in one big mob. Half fired, while half charged. Good, historical tactics that paid off.
With 4 Jokers played by the Mexicans, I managed to kill about half before being overwhelmed.
I think it worked very well and could easily be applied to other scenarios. One thing I might do is add the second Joker in about midway. As players lose models, there are less cards being dealt, and less chance of a Joker. 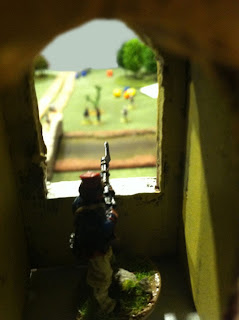 The last holdout in the bell tower.

Posted by BaronVonJ at 8:04 AM

Adding that extra Joker about halfway through might be a good idea. Also, I think the French needed a little more cover by the edge of the river.

Damn it! Just my luck to have to miss on a FFL night (my favorite game). I woulda brought my BLBH personalities too.

Keep both Jokers in from the start. That will force action.

J, Ken's idea is not bad. Another play test to see if 6 jokers is the correct number might be warranted, IF both jokers are in from the beginning.

Did the last FFL character do a "Camerone" (i.e., fix his bayonet and charge in the tradition of the wooden hand)?

Shot out of the bell tower before he could.

Another nice looking game, I'll have to look into more card activation systems.