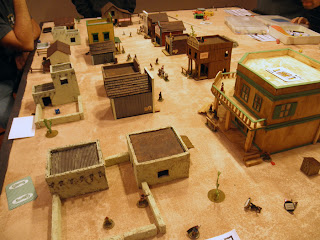 I knew we were having quite few of the boys over last night, so I dug an old favorite, "Fistful of Lead". Every bit of scum in the territory showed up to steal the railroad payroll.
Each player had their own objectives besides capturing the gold. The Leftover Gang and the Injuns started a skirmish right off, but decided after a couple of casualties, maybe a team-up might be better.
El Guappo and his banditos stated in a terrible place between to other gangs, and got chewed up pretty bad. Meanwhile, the Longriders and Stinky Dixon's gangs took advantage of cover and stayed clear of the sometimes violent citizens of Lesterville. (except when the Dixon's almost ran over local Egg Shin and got karate chop in return). 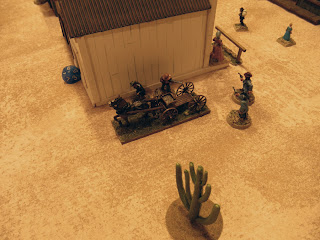 the Dixons steal a wagon
In the end, Injun Joe of the Longriders, was able (with the help of the Dixons) to steal the payroll and win. 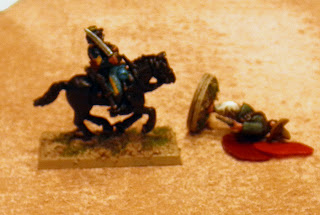 too slow
Cool Update: Video Review by Grubman:
Posted by BaronVonJ at 7:46 AM