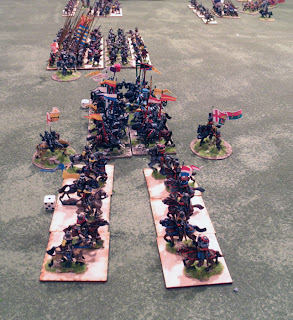 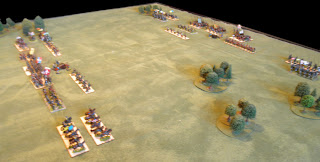 Nice to see you finally found a game that works.

Now some quick mods for Fantasy and we are all set.

Please tell us your chosen base sizes.

I have a huge War of the Roses collection. Each unit is just 60mm square. So that's where I started. The units that make up my Pike blocks are 60mm wide by 40 deep. The Old Glory minis I used are pretty thick but I crammed 8 figs per base. 4 bases gave me 32 figs and the lovely mass I wanted to model. I'm thinking off giving them Large Unit status (as Swiss formation could be huge 3000 man affairs). I then added 2 bases in front with 3 Arquebuses apiece. I wanted to model the integrated skirmishers.
My rank and file xbows are 60 x 40 also, 3 man a base, representing those forces capable of open formation.
The whole set up worked great. The narrower pike formations were able (as in real life) to pack a 2 on one hit on those regular infantry formations too slow or stupid to get out of the way.

We've been hunting about for a set of rules for Renaissance games and have tried most rule sets too. Hadn't thought about HC. Maybe give them a try thanks.

Maybe my plastic Wars of the Roses armies (actually 100YW figures) might at last get an airing. What scale figures do you use?

God's own scale, 28mm.
But HC is flexible with scale.