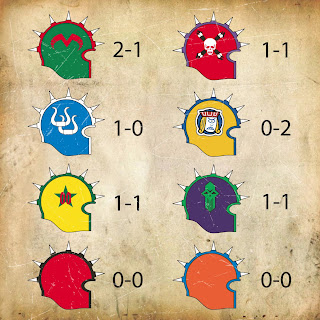 Last night's Thursday game was part of the Blood Bowl League. The Maulers (my team) were handed their first defeat of the season by an 8-year-old (my son). Not just any defeat but a 3-0 loss involving most of the Maulers dead or injured thanks to a pitch invasion.
On the other field, the No-Name Nasties finally got their head wrapped around the game and beat the the One-Eyed-jacks 3-1. To be fair to the Jacks, they were down a few men and lost the use of their star player before the game started to a Dirty Trick.
I'm copying this on the Basement Generals blog also.
Posted by BaronVonJ at 8:27 AM