The battle started precisely at noon, with a bold move by Prince Ruprect. Both Borogravia and Volborg battle lines were arrayed in the traditional way, with artillery and infantry in the center, with cavalry on the wings. But Ruprect sent his son, Ruprect the Younger with all the cavalry from the right wing across battle line to the left. He made it halfway and halted. A disaster in the making?
Meanwhile on the Duchy of Volborg's side, General Wolfe couldn't get his troops to move. His troops seemed paralyzed as their right wing was quickly enveloped.
A cavalry clash erupted soon after. The Volborgians fought valiant were systematically destroyed. With his horse decimated, Wolfe called a general retreat, and the Volborgians fell back to their capital, harassed all the way by Borogravian horse.
This was an odd battle. The forces were almost completely equal, but from the start Volborg was plagued by terrible command rolls, that left them at the mercy of Borogravia's much better rolls. This battle was almost entirely a cavalry fight. A few artillery rounds were lobbed, and one round of musketry.
I still love these rules (Might and Reason) and highly recommend them. Now for the fight in the northeast. 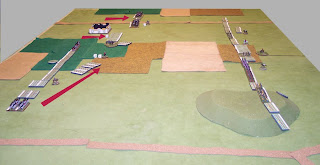 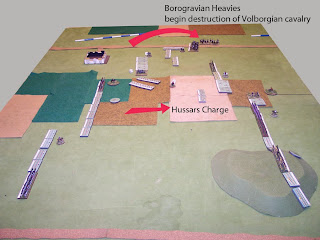 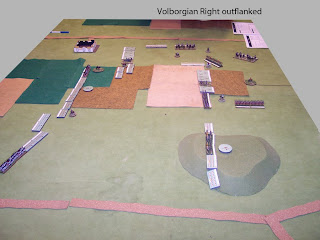 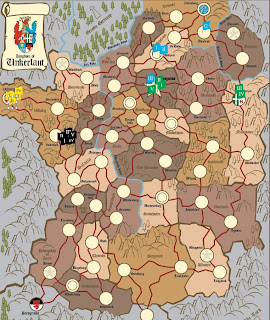 Posted by BaronVonJ at 9:24 AM

sweet.
How do you make your imagi-nations maps?

excellent report and great photos. Could you post a picture of your paper fig stands? and if so could I use them?

I've posted them in the past.
http://baronvonj.blogspot.com/2009/04/in-mean-time.html
What exactly were you wanting?

I was hoping for some cavalry and artillery top-downs like your infantry. Your top-down figs look better than junior general, but I remember now I saved a pic of them last time and can not paint bucket fill the colors because of the pixilation. Any suggestions on how to flatten the image so I can just use the paint bucket tool to change the colors?

Two options. I built them in Illustrator and I can can save them as a pdf. If you have any software let's you modify pdfs, that would work.
Or I can create them in b/w as a jpeg.
-J

sorry my computer skills are a bit lacking, I opened the picture with adobe and saved as an adobe file but was unable to change the uniform colors. Could you send me one in B&W jpeg and I will try and work with that. jeffreycavender at gmail dot com. The picture is very pixilated probably because of your artistic shading and I can only fill one pixel at a time. Maybe you know a better way to do it. I have adobe acrobat, painter and photo shop.

thanks, I will owe you one?

If you pulled it directly from the site, it's a jpeg. That's why acrobat won't do anything. Also in Photoshop you can do a "replace color"
-J