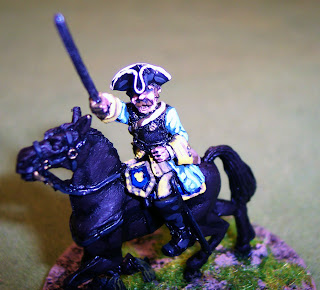 The Zlobenian garrison was outnumbered 3 to 1 in Asstyria and took quite a beating before they were able to retreat. The 3rd Infantry regiment (Thwickhoffen's) and the 3rd Dragoons (Weiss's) were both reduced to half their strength.
Franistover took light losses to Von Grunhalders Grenadiers. The Colonel was elevated to knighthood for his conspicous actions during the battle.

In Ostvald the odds were closer to 2-1 favoring Franistover. Zlobenia's 4th and 5th Regiments (Bladdinski and Vasser's respectively) and the Ducal Horse Grenadiers were slightly reduced, while the 2nd Cuirassiers (Von Chumley's) took a beating during a holding to protect the retreat.
Franistover's 1st and 5th regiments, the Loyal Mountaineers, and Irish Guards all took slight losses in the fight.

The garrison at Ostvald fell back to Altenbruk, and the garrison at Asstyria retreated to join their army at Veckholm.
Posted by BaronVonJ at 1:18 PM

Will the Franistover Steamroller roll on? Or will it bog down?

I'll have to wait and see.

I had the same question ...
Franistover seems to have a big advantage in manpower?
Arthur

Minor victories over garrison forces. Zlobenia will bring her full force and crush the Franistover II army, Franistover is spread too thin and will suffer to the combined might of Zlobenias 3 armies.

I think you're giving these generals a bit too much credit. This is Unkerlant, after all.

While the Duke's starving forces slink and cower in the fortress. I will be dining on ale and meatpie.