Thurnin is a quiet place, full of quiet people, who don’t like to be disturbed. Most of southern Unkerlant was ravaged during the last war, but Thurnin managed to escape most of the devastation by being exceptionally neutral. This attitude further cemented their belief that it’s best to stay out of the way and mind your own business. But, Thurniners should not be considered passive. They can be very forceful when it comes to keeping this peace and quiet. “Never wake a napping Thurniner” goes the saying.
The sleepy towns of Spetz and Bergsburg are where most of the populace lives. Bergsburg sits high in the foothills amidst the many goat herds. The milk from the goats heads north to Spetz the make a peculiar cheese native to the land. It takes a strong stomach or a complete lack of olfactory nerves to eat Spetzencheez. Natives love it and outsiders fear it. It has even been used in several border skirmishes as a type of chemical warfare.
The heavily mustached Graf Egbert Von Thurnin keeps the peace in Thurnin. While Unkerlant swims in almost constant turmoil, the old gentleman keeps Thurnin a island of calm.
When Thurniners are forced to battle, they tend to want to get the fight over quickly so they can return to their quiet lives. 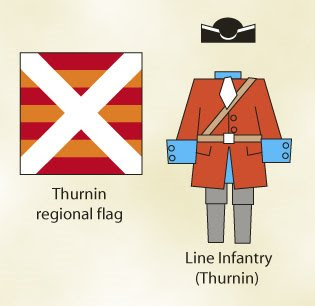 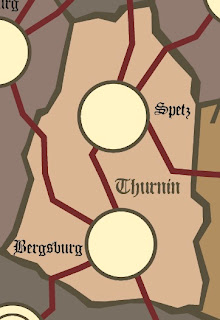 Posted by BaronVonJ at 2:22 PM