Anybody who played D & D in the 80s has to remember one of the first complete worlds to game in, the World of Greyhawk. I lost more than a few characters to the lands of Oerth. I dug it up the book a few months back and found some inspiration to paint up all the extra fantasy/medieval figs I had lying about that were left over from larger units. The first unit had to be from the Free City of Greyhawk itself. Some Hundred Years War French pavasiers would fit nicely as Greyhawk guardsmen called to battle.
My ultimate is to do a few of these one offs a year till all the lands of Flanaess are represented. 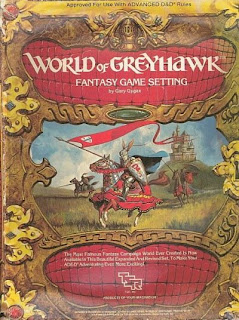 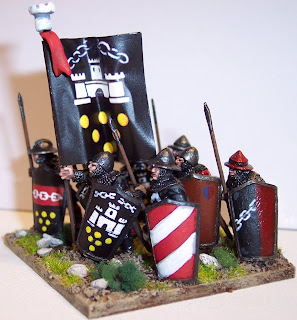 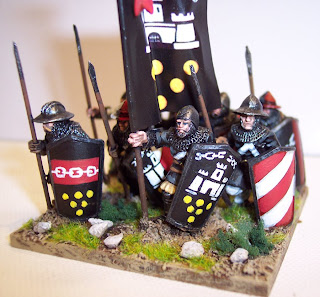 Posted by BaronVonJ at 7:42 AM

Oops, I guess I don't know how to make a link work.

These look great! Have you ever fooled around with army lists or troop rosters for the various Greyhawk states?

WOW! Those are perfect! Exactly the sort of thing I'm hoping to do myself, although you're an infinitely better painter than I.

What scale are those figures?

Chuck: Grendelwulf, over at http://axe-n-hammer.blogspot.com/ has been putting together a bunch of Greyhawk army lists for FoG, based on a series of Dragon magazine articles from the 1980's. Worth checking out.