The King managed to get his troops under control. Lines were straightened just in time for the rebel impact. The two sides smashed together in the center first. Duke Sancho called out a challenge to the king for single combat. Whether the challenge was lost in the din of battle or simply ignored is not known. What was known, however, was that the king was losing. His men were breaking all along the line. 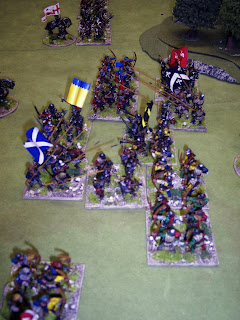 Just when all seemed blackest, the tide shifted. It started on the rebel left wing. The trolls took off after a volley of arrows picked off a few of them. On the right a charge by Sir Roderick was stalled, and the counter-attack wiped out 4 of his units. In a few moments the rebels went from winning to almost at the breaking point. 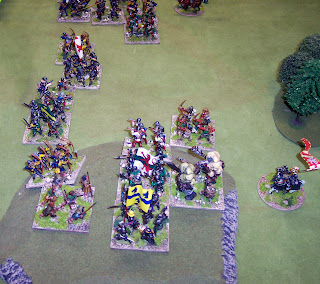 One final push by the rebels stalled again, and a volley of arrows by Maurice's troops broke their backs.
It was over. The rebels fled the field, their commanders rounded up and beheaded.
Long live King Rutiger! 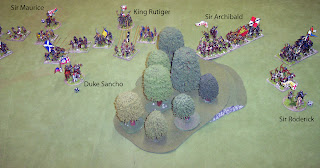 It was a great game. What seemed like an easy victory (Rutiger and his commanders randomly rated as Buffoons), was reversed.
The mapless campaign system work wonderfully. No waiting around for map moves. When everyone's rested from the holidays, maybe we'll do it again.
Posted by BaronVonJ at 1:35 PM

What rules were used??

"Flower of Chivalry" by Canadian Wargames Group. It's a much underappreciated set of rules that I think are great for medieval warfare. My only modification is that I use a single base for unit, instead of a 6-base unit where stands are removed as casualties. I use the single base and roster cards with dry-erase marers.

It seems like the player in charge of King Rutiger is an exceptional strategist and a great gamer. Beautiful miniatures, great game!

This was an outstanding game and a terrific campaign. The random determination of the commanders capabilites at the outset of each game add to the flavor. I really thought the King Rutiger had zero chance this last game with 2 buffoons and a plodding commander up against the well governed rebels.