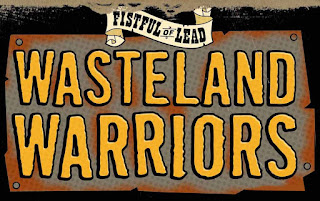 We had a 6 player game of Wasteland Warriors last night. This was mainly to try out the "Scavenging" rules. Resources in the Wasteland are hard to come by, so part of every scenario includes a few spots around the table where food, gear and equipment of the ancients can be dug up. But careful, sometimes things can go horribly wrong. You might trigger a booby trap and stir up a sleeping monster... 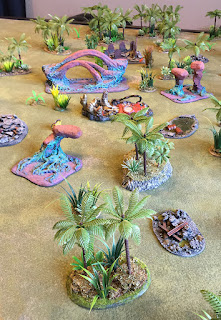 Do you know where you are...? You'r in the jungle, baby!
And who says the wasteland is desert? On the contrary, sometimes it's ruins, sometimes a fetid swamp. This part just happens to be a blistering hot jungle full of danger. 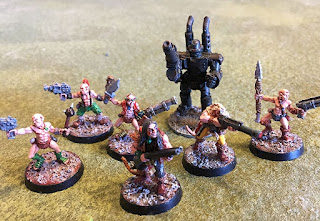 Rats and robots
With a six player game there are bound to be fleeting alliances and someone always gets ganged up on. Enter the Ratskin gang. By turn 4 they had been attacked by 4 different gangs and lost all of their younger recruits. The Book of Grudges was heavy with payback.
The ancient warbot, GI-88, electronic heart heavy with grief over the young one's deaths, turned his heavy machine gun on everything in range and unleashed hell! 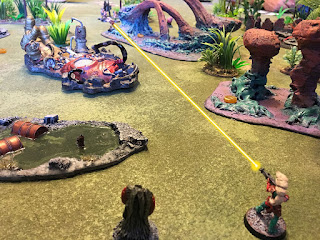 Meanwhile, Orange Julius (those who follow this blog know the name. A misogynistic lout who regularly gets killed first turn) and his girls were taking heavy fire from both the Knights of Genetic Purity and Sweet Jimmy's family of mutants. 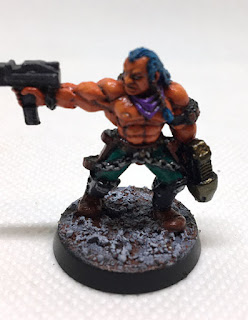 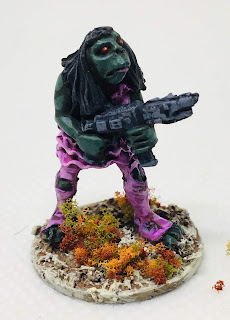 The beautiful Tutu
Tutu, emerged from the foliage to use her Mesmerizing mutant trait to lay some allure on Miss Yvonne, one of Julius's girls. It didn't work. All her love pheromones got her was a bullet in the skull.
Filled with rage, the oversized Jimmy charged out of the woods screaming his battle cry "Jimmmmmmmmy"! 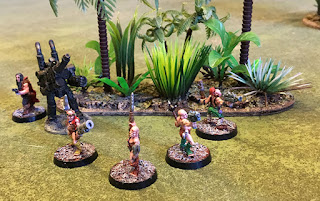 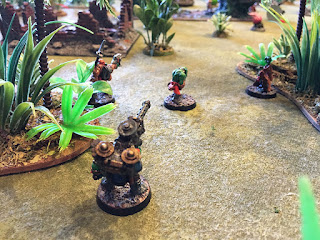 The Animal Kingdom mutants were also stacking up loses. Their leader, The Ape With No Name was out in turn 2. Armand the Armadillo released a stinking cloud to cover one of his gang digging around for loot. Instead of ancient treasure he released a horde of hornets causing every around to gain 2 Shock markers. 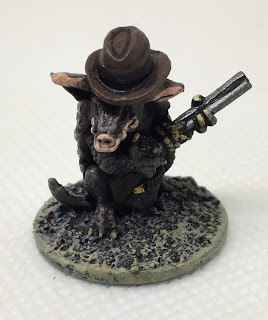 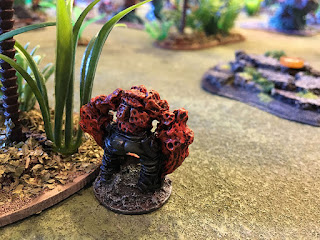 Lenny eyes a prize. His claws weren't good at picking up delicate treasures. 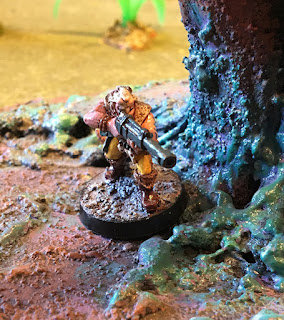 Ratbastard takes aim
Mutant fought Human. Robot fought animal. Things were building to a a final crescendo.
The Ratskins were out. Jimmy was down. Orange Julius had lost all his babes. The Knights, who at one time had quite a bit a loot had now lost it to the grubby claws of the Animals. 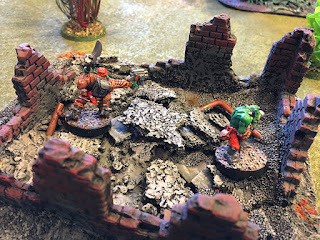 The Ornks, a race of ancient genetically grown super soldiers gone wrong, had managed to survive mostly unscathed. With that, they survivors slunk back to their various hovels to lick their wounds (some literally) and check their treasures. 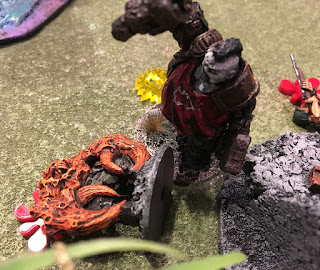 Jimmy protects a fallen friend
A great game filled with funny moments and perilous daring dos.
Halfway through layout. Really just some rough edges to work out and the scenario/campaign to write along with a Menagerie to stock the Wastelands with.
Posted by BaronVonJ at 8:32 AM

The game looks a hoot. I must check them out.

This looks and sounds awesome!