Revenge of Boot Hill: A Fistful of Lead AAR

Last night I wanted to try out some revised rules for introducing the Undead to Fistful of Lead for a special scenario available with the FfoL:Reloaded Kickstarter.
Sometimes, those men sent to Boot Hill do not rest peacefully. Sometimes, they come back, looking for revenge.
It might be that the old cemetery is actually sitting on top of an older Indian burial ground. Or, those men are just too plain honery to stay dead.
Either way, it’ll be a rough night in Lesterville...
Marshal Bill and his men have the unenviable job of protecting the citizenry from the undead hordes, or “Deaders” as they call them.
Four players took the role of the Marshal, his men, and the deputized citizens.
I took the role of the Deaders.
The Marshal has to destroy the 5 spawn points around the edge of town before being overwhelmed by hordes. This part proved the end of several deputies. 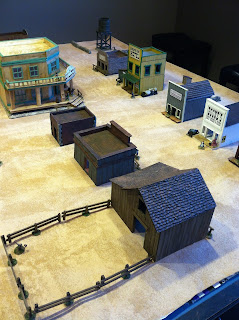 The town of Lesterville 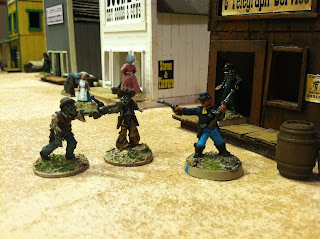 Trooper Jones mixes it up with some Deaders 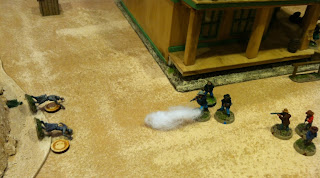 A few Deaders go down under a hail of gunfire. But not out. 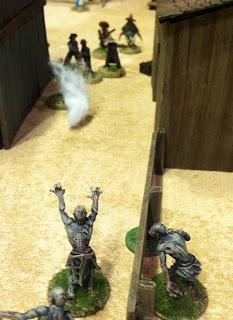 It came down to Trooper John facing down 10 newly spawned Deaders. He took 5 before being overwhelmed. Slick Dixon, that lowly lout, was the only survivor. He lit outta town, leaving Lesterville to the dead.
I took some notes, but overall it proved pretty balanced.
Posted by BaronVonJ at 10:29 AM

That would make a great game for a club night.

We must have been a nervous lot last night. I have never seen so many Out of Ammo rolls. Great game!

Zombies always spice up a game.

Did you know you can shorten your urls with AdFly and receive cash from every click on your short urls.