A Cannon for Captain Cortes 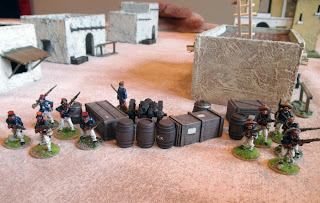 Yesterday was Cinco de Mayo, so I thought the Thursday game should have that theme.
The hated French have a garrison of Legionnaires in the small village of Villa de Loco. They also have an old cannon. Captain Cortes, leader of the local resistance, wants the cannon for the Revolution. 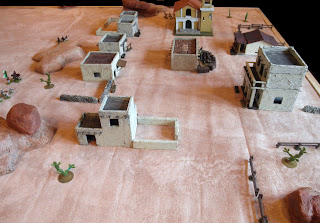 Villa de Loco
The French players were allowed to set up first, anywhere in the village with the cannon and a bunch of stuff to build a barricade. They elected to set up in front of the barracks. Half held the windows facing north, and the other with cannon facing south. One brave Legionnaire climbed on the roof. The French objective was to hold out. They're Legion, so everybody knew they were dead. 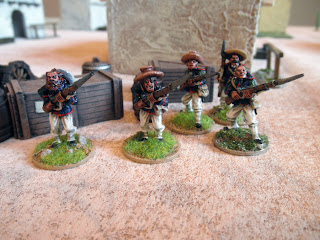 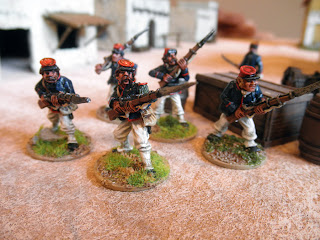 the Legion's second squad
The Mexican forces (which outnumbered the French 2-1) needed to capture the cannon. Bonus points were awarded for planting the Mexican flag on the barracks. They would approach from the table edges. Captain Cortes and two regular units would come from the north. A band of machete armed militia came from the east protected by the church. Finally, a group of Banditos moved in from the southwest. 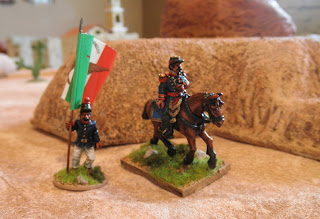 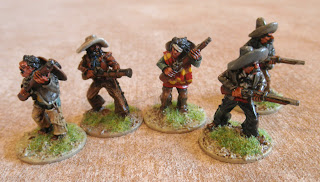 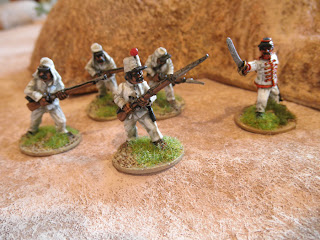 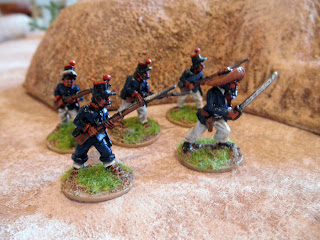 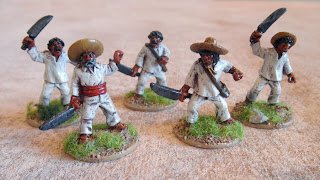 Machete wielding farmers
The French were able to pin down most of the regular Mexican forces right away. One brave sergeant charged the barracks and killed a Legionnaire with a sword thrust through a window, but was pinned immediately with rifle fire from the other windows. First blood to the Mexicans.
The Banditos occupied the cantina and began pouring fire down from above. That was when the cannon was turned toward the cantina. BLAM! The building was damaged and on fire, but still staying up. 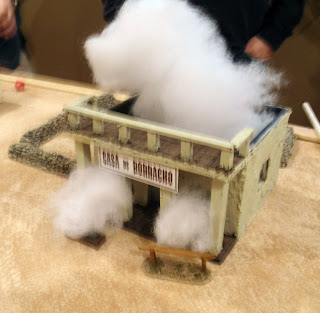 Next, the militia charged from cover of the church. Miraculously, (maybe the village priest blessed them) all survived the fire to attack the barricades. That's when most of them died. 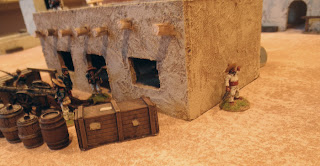 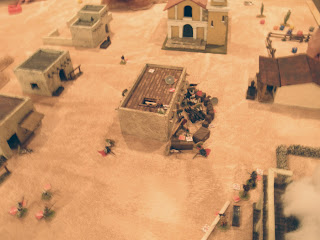 A couple more rounds of fire were exchanged, then the cantina collapsed. One bandito died, and the rest were wounded. A few stumbled from the wreckage to join in the assault on the barricade. It was a blood bath. The Legion fought and died. Soon, only the lone legionnnaire on the roof remained. Though wounded he fought back repeated attacks. Then, Captain Cortes rode out. He carefully leveled his revolver and BANG! dropped the last Legionnaire. But he wasn't dead. A final bayonet thrust from one the Mexican regulars finished him.
Viva la Mexico! Viva la Revolution! 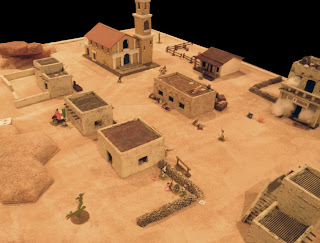 The rules were, of course, Fistful of Lead, modified for single shot muskets.
Posted by BaronVonJ at 7:48 AM

p.s.
The French players knew they were doomed, but still fought it out w/o complaint.
-J

Of course. Are they not the Legion? They are expected to die.

The highlight of the night was the cantina collapse. A squad of unwounded Mexicans was pouring murderous fire into the Legion barricade. So the French turned the cannon on the building.

When the building collapsed, el-Billie had to roll for falling damage on each of his figs. The mixture of 7s, 8s and 9s was a thing of beauty (4 wounds, 1 dead). A great moment of shared laughter in a war-game. Priceless.

Yah, real funny. :) It was a good game. We could do French and Indian war with the same rules.