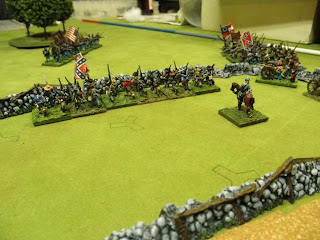 "Deploy behind that there wall, boys!"
I forgot how much I liked playing smaller scale Fire and Fury. As lovely as a table full of troops looks, being a able to finish a game in an evening is much more satisfying. This game, everyone commanded a division of three brigades, with some divisional artillery support and an extra cavalry unit for fun. The

Union side got some extra troops and canon to offset the Rebs combat bonuses.
It was a simple meeting engagement (a wargamers crutch, I know). My plan, on the Confederate side (we chose randomly, Kenny) was to use 2 brigades to pin down the Union on my left, take the town quickly to use as a strongpoint, then, throw most of our troops on the right and roll up. 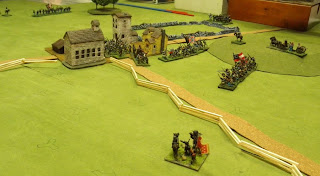 Sweeping around the Right
Everything was going according to plan. The cavalry on the far right swept around the flank and managed to break up a couple of formations. The town was taken. 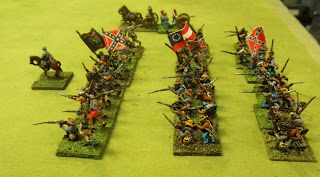 "Let's give them Blu-bellies a lickin'"
But then, an extremely obstinate Federal brigade on the Union far left (our right) refused to die. The earned the nickname "Iron Brigade". When they finally did break, the had managed to hold up the Confederate advance enough that my pinning units were destroyed, and they managed to re-deploy to counter any roll up the flank.

My poor brigades left defend the far left
In the end, it was decided the Rebs would consolidate in the town near nightfall, but ultimately fall back under cover of darkness.
We're getting ready to start an ACW campaign early next year using the "House Divided" boardgame for campaign moves and Fire and Fury for tabletop. We've done it before with great results.I've also picked up Ganesha Games "61-65" which looks great for small scale battles.
Posted by BaronVonJ at 8:35 AM

Meaning you had one deck with all red cards that you picked from, then reshuffled in black cards for everyone else.

Nice to see them dirty Rebs fallin back as ususal.

Wish I could have been there. Looking forward to the 22nd.

whatever shall we do?

Hmmm, I don't see a photo of the cannons that were shelling the bejesus out of that Reb held town.

Are the wails and moans of that poor beleaguered regiment haunting you?

Threw an awful lot of lead, for only a few casualties.
-J