I wasn't sure who was going to show Thursday, so I dug out yet another old favorite rules set "Flower of Chivalry". For Dark Age you say? I think it works even better one of my favorite periods.
In this particular battle, Viking raiders decided they would take advantage of the current instability in England (what with a new king taking over) and raid a large village. The local Normans heard about the landing and are racing to stop them. 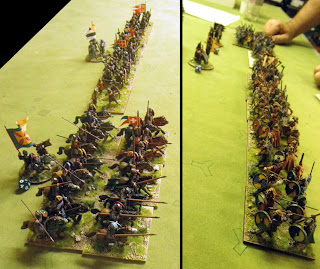 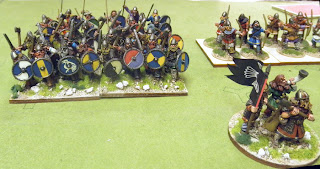 If the Vikings could spend 3 turns in the village, it would count as "looted", for purposes of the game, and give them extra victory points.
I had command of the Norman horse. "What? The horse killer himself in charge of cavalry yet again? He must be getting cocky". Facing me across the table and making a bee-line for the village was the Marshal. A ruthless adversary who would show no mercy. 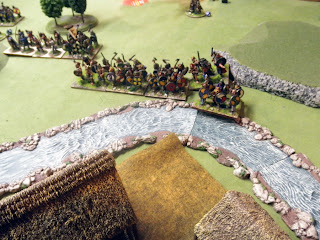 My plan was to use my speed to reach the village first. But I forgot, horse don't move that much faster than foot, unless they charge, and I'd be blown once I got there. My first turn, they wouldn't even move, same for my ally controlling the foot. Across the table the Norse were making steady progress, although the Marshal's troops were spread out and not holding the tight formation his fellow commander had.
Well, I managed to get to the village first, then realized I would drop to a crawl once inside the village perimeter. There were a few rounds I was subjected to bow and missile fire and lost a unit. I almost dismounted, but decided not too. I'm glad I did, because once I came to grips with the spread out vikings, I slaughtered them. 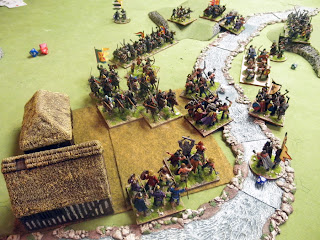 On the other flank, most of the heavy Norman foot never got to blows. I single militia unit was holding the high ground against all comers, even the Viking Huscarls. We broke them, 7 stands to 4.
Posted by BaronVonJ at 8:15 AM

"The army stands in hushed dismay;

Stilled is the clamour of the fray.

Harald is dead, and with him goes

The spirit to withstand our foes.

A bloody scat the folk must pay

For their king's folly on this day.

He fell; and now, without disguise,

We say this business was not wise."