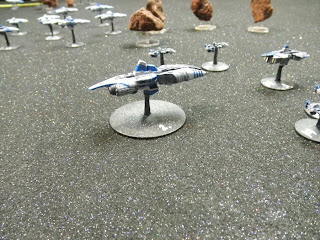 The Carrier "Lasalle"
Last night the Neo-Soviets invaded Euro-Fed space, in a Full Thrust space battle. Both forces contained mostly ships-of-the-line with a capital ship split up between three groups. 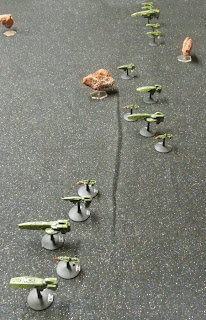 The Neo-Soviets charged in fast, catching the Euro-Fed fleet unable to maneuver amid an astroid field. But, the Battleship October Revolution, came in a little too hot. His engines were damaged and she was unable to turn very quickly or slow down properly. As a result, she flew right out of the battlefield.
A huge fighter skirmish erupted. Several of the smaller ships were swarmed and destroyed. 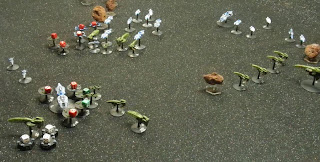 The battle swayed back and force for several turns, but in one turn the Neo-Soviets lost 4-5 ships and it was over. I'm sure they'll lick their wounds and be back...
All ships and terrain are Lead Addict's
Posted by BaronVonJ at 7:40 AM

I like those ships, especially the green ones you're using for your Neo-Soviets...

I know they are Cold Navy Mauridians, but do you remember which ships they were?

All the ships belong to Lead Addict
http://leadaddict.blogspot.com/
I will ask.
-J

This has them all listed with the assembly instructions. Its all of them.